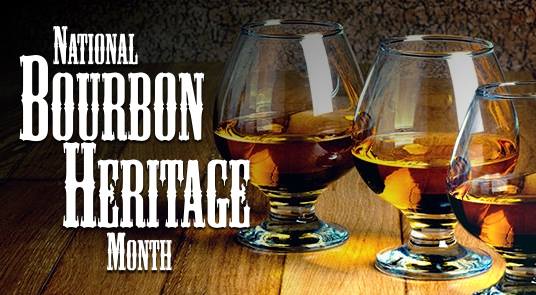 *Stay tuned for CBS events in September!  Check the events calendar to stay up-to-date. HISTORY OF BOURBON HERITAGE MONTH Dating back 400 years, American Whiskey established itself as an important factor

HISTORY OF BOURBON HERITAGE MONTH
Dating back 400 years, American Whiskey established itself as an important factor in the economic development, and cultural shaping in the history of the United States. It all started when English colonist George Thorpe filtered the first-ever batch of corn whiskey in Virginia. The founding father of our great nation, George Washington, continued this tradition of distilling and operated the largest whiskey distillery in Virginia, in the nation’s early years.

It is widely believed that Elijah Craig is the Father of Bourbon. In 1789, Craig concocted bourbon by maturing the existing corn whiskey, or moonshine, in oak barrels. Popular as this theory is, many argue that bourbon was not invented by any one person, and instead evolved over time.

Even though America’s distilling heritage started before the nation was founded, bourbon was declared as a unique product of the United States in an act of Congress in 1964. Federal law states that bourbon must be produced in the United States, contain at least 51% corn, and mature in freshly charred oak barrels for at least two years.

In 2007, a resolution was passed by the U.S. Senate, declaring September as National Bourbon Heritage Month. Every year, bourbon enthusiasts come together to appreciate the history, craftsmanship, and milestones of the bourbon industry.

Read the proclamation by Andy Beshear.

In 2007, the US Senate declared September as “National Bourbon Heritage Month.” Bill S. RES. 294, sponsored by Senator Jim Bunning of Kentucky, passed the 110th United States Senate by unanimous consent. The bill reinforces the 1964 Act of Congress that declared bourbon “America’s Native Spirit” by celebrating the family heritage, tradition, and deep-rooted legacy that the bourbon industry contributes to the United States.

Ever since then, Bourbon fans and distillers have celebrated the month of September as National Bourbon Heritage Month, or as we like to say – The Best Month of the Year!